February has been an intense month for the Foreman team. We gave a few talks at FOSDEM, got in touch with the community at cfgmgmtcamp, and overall had a great time.

After all of these events - we will go over them in the February newsletter - we are now ready to discuss what the results of the community survey have been. First and foremost, THANK YOU to everyone that replied. We are incredibly thrilled to hear how all of you are using the tool.

The reason why we launched the survey was essentially to understand what features should we focus on and what are we missing. I think the results will be instrumental to Foreman’s development in the future. We had a total of 118 responses.

1.7.x was around for about one month and a half at the time the survey was released. We support the two latest minor versions (1.7 and 1.6 in this case) so 86% of the installations are officially supported. If you are using 1.5 or older versions, please take into account your installation security might be compromised and upgrade. Tell us on #theforeman or #theforeman-dev (IRC channels on Freenode) if there is any particular bug or feature in new releases that holds you back.

The vast majority of installations (86%) are under 1000 nodes. We love feedback from our biggest users as they have unusual performance problems that lead to improvements for both small and large installations. The needs of most users are covered by less than 1000 nodes, which Foreman can deal with very well. Larger installations (100k nodes even!) are not unheard of, and JJ (John Jawed) from eBay/PayPal talked about his experiences with Foreman and Puppet at Puppetconf 2014 managing a very large deployment.

I would have expected a larger proportion of Debian/Ubuntu users, we devote some time to its packaging and testing. I think this graph does show an over representation of users of Red Hat based servers, partly because the survey was initially sent to a series of employees at Red Hat.

This question helps us to prioritize features. For instance, RBAC is a important concern for installations with more than 10 users, however they make up 20% of all installations.

More or less expected, although usage of Hammer is a bit low (< 50%). Our guess is that we might not publicize as much as it deserves. If you have been looking for a good Foreman CLI, you can find instructions about how to install it in the Github repository . It also supports Katello through hammer-cli-katello and has a pluggable interface so extensions can be easily written for any plugin. API v1 is still used by 12% of the respondents, we would like to remind you v1 is deprecated and urge you to update your scripts to use v2 which is considered stable now. If there is any feature you are missing, please tell us in the mailing list or #theforeman-dev on IRC. 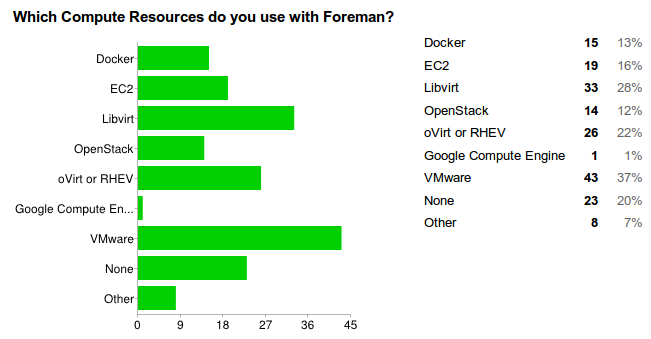 This graph was the most surprising of all. I would have expected Openstack or EC2 to be number one, but they are not even in the top 3. Perhaps the lack of support of advanced features, or volumes are responsible in this case. Similarly, VMware support is not very good yet most of our users with compute resources use it. GCE is completely broken due to changes in the Foreman API, and we did not catch it. Docker’s case is particularly interesting as it surpasses Openstack in usage, even though it is not useful to deploy clusters yet. We expect usage can only increase.

Most people were interested about a meet up in their area. It would be interesting to know in particular which areas would have a large enough group of users to organize an event. If you would be interested, please send an email to the foreman-users mailing list.

The graphs seem to support that people are happy with their config management tools. However the configuration of a whole infrastructure remains an unsolved problem. Results for the multi host deployment interest make us confident when exploring this area. Petr Chalupa explained at cfgmgmtcamp ‘15 some plans that Foreman will follow in this area.

By far the most requested feature. The question is unintentionally vague, but what I had in mind when I wrote the question was mainly scheduling of Puppet runs / Salt highstate, improving what we already have, getting a console, and perhaps adding hooks to make Foreman a gateway for the dbus API.

This one graph is a bit skewed, as most users who already use Foreman are already happy with their current configuration management solution. However, we do realize one of the main drivers for new users would be to stop being as Puppet focused as we are now and integrate better with other solutions.

Most users are not managing installations where containers are important yet. However the industry has its eyes set on containers for the future, so it’s not a surprise people would like to have it in Foreman already to fiddle with it.

OpenSCAP is a new feature in Foreman, and most users will be unfamiliar with it. Governmental procedures for IT security are often more standardized than at private companies, however we recommend migrating your compliance rules to OpenSCAP to get better security compliance at your data center and manage it through Foreman.

Improved networking has continually been high on the list of requests for future Foreman releases. We’re happy to report that 1.8 will feature a completely redesigned UI in the Network tab, allowing use of separate provisioning networks, bonds, aliases and so on. We’ve also merged the creation of “physical” devices on virtual machines into this UI, removing the duplication of workflow on the VM tab. Please do give us feedback on this new UI and see the list of things we still want to implement at ticket #2509

As expected, improvements to features we already have are very favoured by the community. However we remain open to new, different contributions that allow people from other communities to start using Foreman.

Here is a distribution of the percentage of users that use each Foreman plugin. We only asked for plugins in the official list in the wiki , so if you have created a plugin and you cannot find it there, please add it. As expected very generic plugins such as discovery and default_hostgroup are very widely used, and more specific features like Xen, Salt, are less used. The Salt plugin has already overtaken Chef, and Foreman in the future should be able to easily assimilate more configuration management tools such as Ansible, and remove the Puppet dependencies if you just want to use it as an inventory.

To finish, I would like to list some features you asked for in the survey very frequently. We will take these seriously for future releases, as 1.8 is almost out of the door:

Thanks again for responding to the survey, our community drives Foreman success!