It’s been 6 months since the Foreman community switched to Discourse, so I wanted to revisit some of the graphs I drew in November (when I was justifying the migration) and see if its had a positive impact. Spoiler alert! It has :)

Back in November, I made a big deal about not only how our mailing list was failing, but also about how a more modern medium could help us achieve our goals better. Six months in, it seemed appropriate to try and evaluate a few of those things. We’ll take a look at overall post count, active user count, and the interaction between the two.

Thanks to importing all the mailing list posts into Discourse, we have post/topic/user data going right back to the creation of the mailing list some 8 years ago. Discourse itself generates far more metrics we could look at, but since we want to compare to the old lists, we’ll have to restrict ourselves to these.

Since we want to compare like to like, we’ll also only use the first 6 months of 2017. Obviously we have all of 2017, but there’s complications in using it. Firstly, it’s a different time period, so seasonal effects may come into play (e.g. it’s always quieter at Christmas), but more importantly, Discourse trials begin in November, which would make interpretation very hard. So, we’ll use 2017-01-01 to 2017-06-30 (and likewise for 2018).

We do have the data per day, but that causes zero-inflation issues - our community is always very quiet on Saturdays, and somewhat quiet on Fridays and Sundays too. To avoid modelling issues with this, we’ll aggregate the data by week - look at this graph to see the difference: 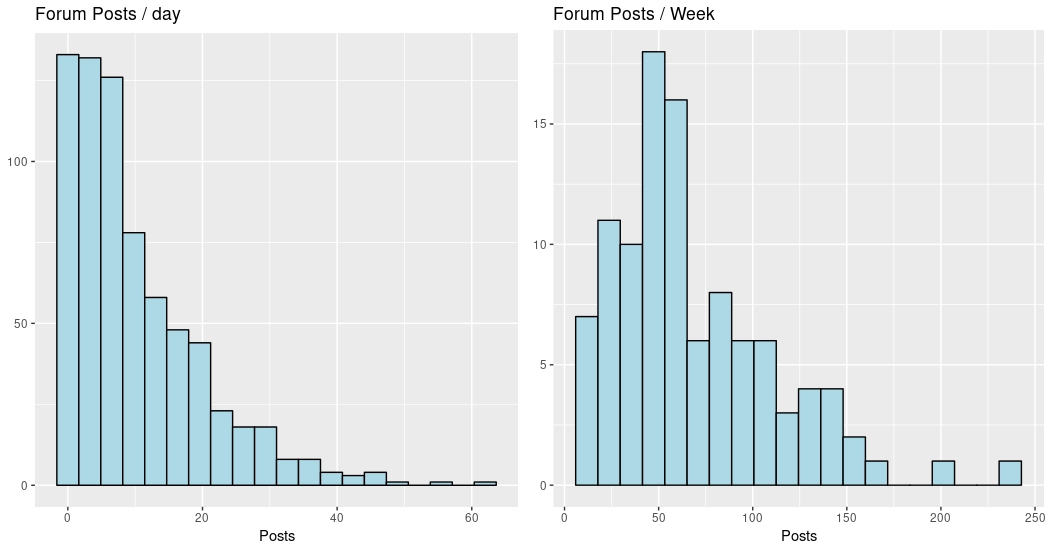 As you can see, grouping by week makes for a more “normally distributed” data set, which is better for modelling (yes, I could use a Poisson GLM or something here, but I don’t think it affects the result).

We can break this down in a few ways - the whole data set, two groups by year, two groups by list (foreman-users and foreman-dev), or a 2x2 matrix of both.

Let’s start by seeing the raw post count by week for each of the lists. This is simply the forum_posts column, one graph per channel, and with the two year’s data overlaid: 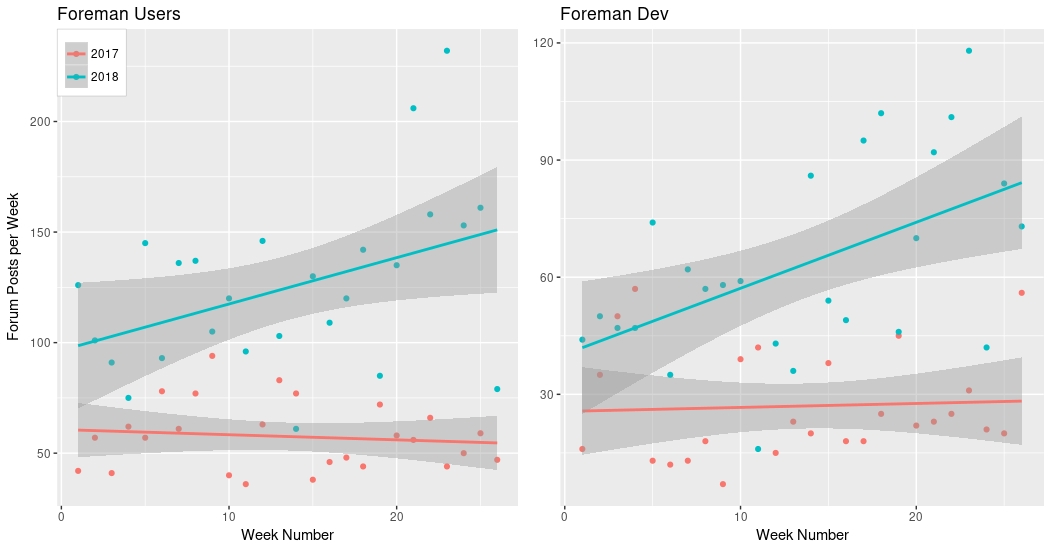 The lines are a linear fit, the shaded area is the uncertainty in that fit.

We can see that in both cases, the 2017 data shows the mailing lists were not doing well - dev was growing slowly but users was declining. 2018 looks much better! We can also look at this from an averages view:

In both cases, the mean posts per day has more than doubled, which is a big deal, I think. However, there’s a catch…. 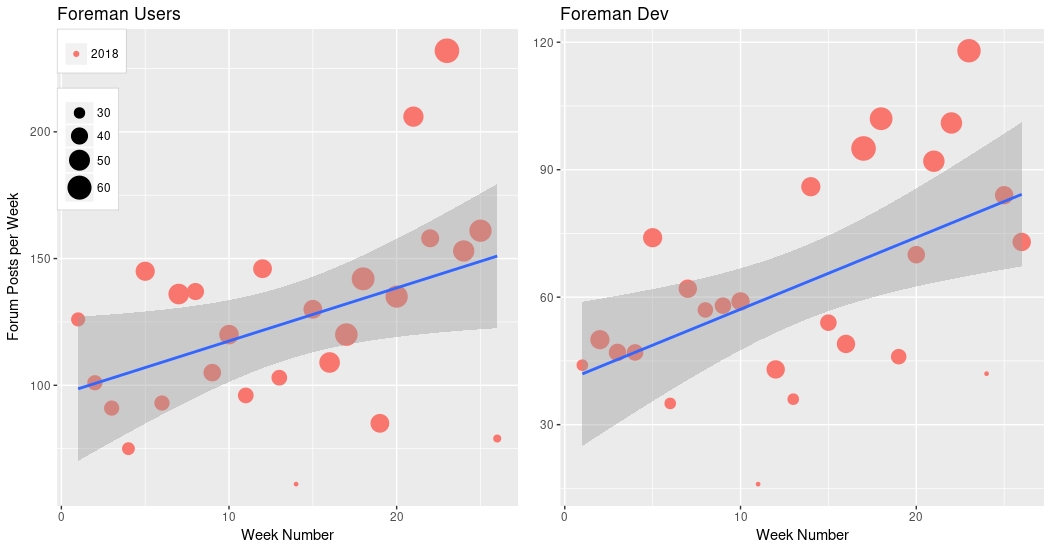 I’ve just plotted 2018 here, for clarity, but 2017 is similar. So, yes! We do see a rise in the number of users - this is great news! We wanted to widen the community, and we seem to be achieving that. We can actually test that, for foreman-users:

The things to focus on here are:

We can do the same for the foreman-dev:

Same results - large difference in mean, and the confidence interval is even further from zero.

So we know the number of users has increased - what does this mean for the number of posts. Happily, we can use some statistical modelling to account for that. We’ll use a model like this:

So we’re saying that posts is some combination of the time (week_num) and the number of authors (forum_users), plus some constant. Using this model, we can try to make a statement about what we would expect the effect of week_num to be while holding the number of users constant. Let’s try that.

Here’s a graph of forum_posts divided by forum_users for each week - that’s not quite the same as the model above, but it gives us a way to view the data. Over the top I’ve laid a simple linear fit to that normalized post count; you can see that for 3 of the graphs, it’s pretty much flat: 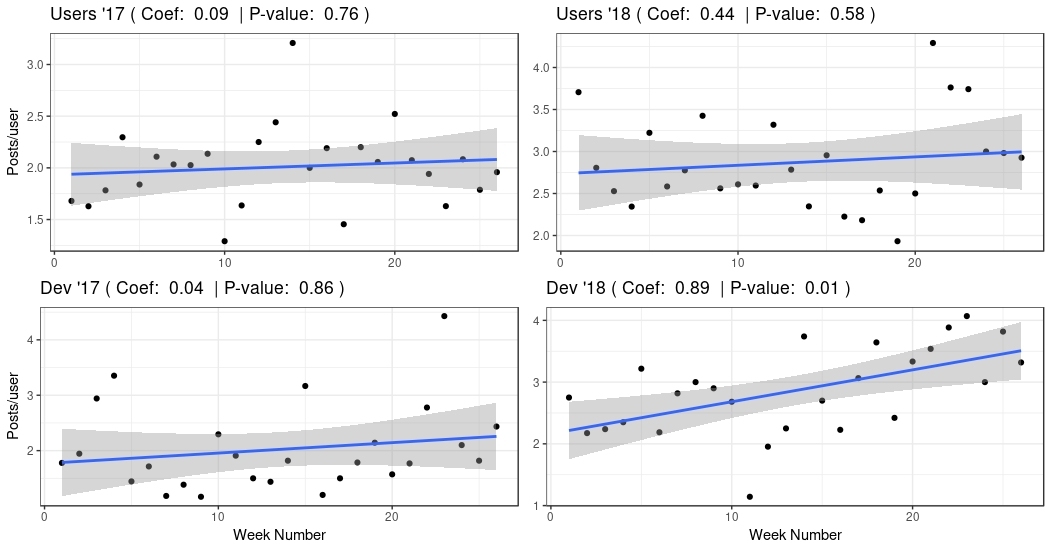 However, the Dev 2018 graph is not flat. If we investigate the model more closely there, we can see an interesting result. Here’s the model output:

I’ve trimmed the output to just the coefficients. What this tells us is that we expect to see an increase in the number of posts to the Development category over time, even while holding the number of users constant. Specifically, we expect between 0.3 and 1.5 more posts week-on-week, even if the number of users doesn’t change. That’s to a 95% confidence level (i.e. there’s a 5% chance I’m wrong, and this is all by chance).

There’s clear evidence of an increase in posts and number of users since the move to Discourse. I don’t think that’s surprising - I’ve certainly felt the impact, and I believe others have too. I’ve spent much more of my time replying to posts than I used to on the mailing list. However, that the mean number of posts has more than doubled for both categories is a surprise even to me. In terms of raw numbers, that’s quite a turnaround (and less than 1/1,000,000 chance of it being a freak accident and nothing has really changed).

However, it’s the result for the Development category that I really like. One of the arguments I made for Discourse that seems to resonate with people is that it would bring better tools for the developers to discuss the project and come to consensus on how to move forward. While this data says nothing about consensus specifically (we could all be arguing more :P), it does show that we’re all talking to each other more as time goes on. Speaking as a long-time remotee, I like it when I see communication between people increasing :)

Can we attribute this to Discourse? Well, there’s an age-old saying that correlation does not mean causation. However, thanks to Hill’s criteria for causal relationships, we can still draw some conclusions. Most applicable is the fact that no other large event took place in our community that could plausibly cause such a change, and the mechanism by which Discourse could cause a change is also fairly clear. I’m going to go out on a limb and say these two things are linked :)

So, six months in and it’s looking pretty good. How are you finding Discourse?

P.S. If you want to check my working, I’ll happily share the code :)

The 2021 community survey is now live! Please take a few minutes to fill it out and help us make Foreman better!

Foreman 3.0.0 has been released! Follow the quick start to install it.

Foreman 2.5.3 has been released! Follow the quick start to install it.

Foreman 2.4.1 has been released! Follow the quick start to install it.