The Foreman birthday event was a community driven one-day celebration. It was held at the NETWAYS office in Nuremberg on 25th July 2019. The event consisted of 2 hours of hacking and demo followed by multiple talks. Let me take you through them in more detail in this blog. The birthday event aimed to present a perfect opportunity of networking with the community and explore the modern trends and solutions in the Foreman project. Connecting the community, discussing & debating on latest technologies were one of the main focus areas of the event.

The party started at 12:30 pm with a hacking session. A few demo machines were prepared by Dirk for users to explore Foreman while our community folks from ATIX had a booth where they demonstrated the working of orcharhino.

During the hacking session, there were many productive discussions that took place on topics such as the Foreman documentation, string translations in Foreman core and plugins, Foreman salt plugin and many more. There were a few issues that were discovered and filed to redmine on similar topics. 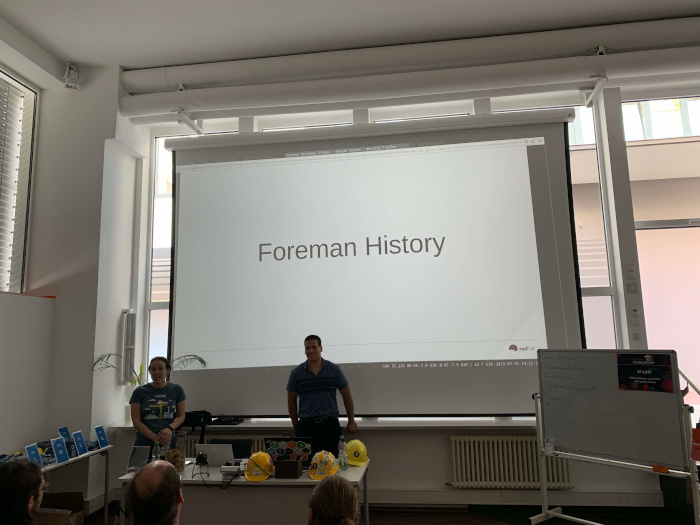 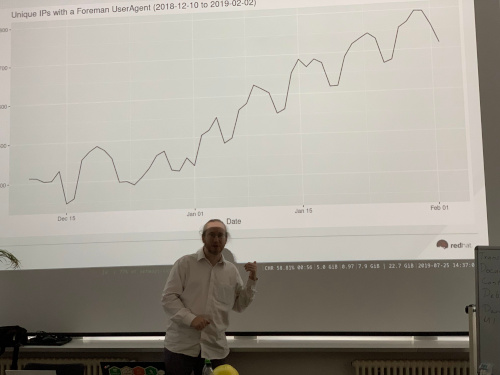 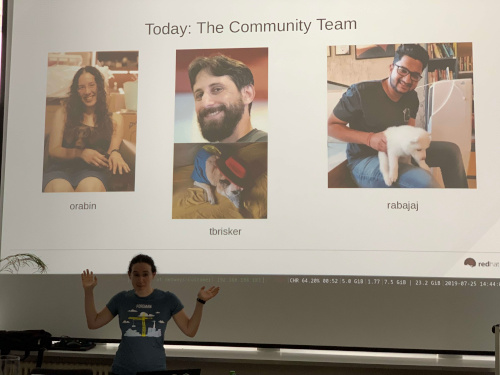 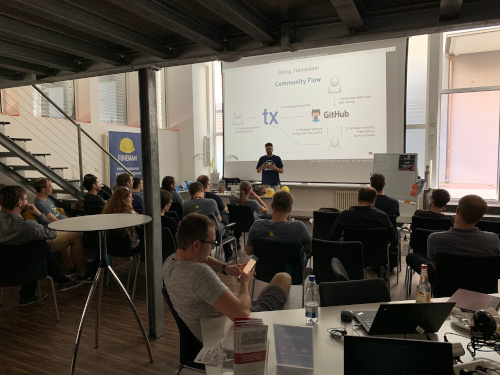 2) The State of Debian Support

Quirin Pamp spoke about “The State of Debian Support in Foreman/Katello”. The talk focused on Debian/Ubuntu package actions in Katello (now merged), as well as Debian/Ubuntu errata support (undergoing active review here. The latter included some discussion of the ATIX errata service to obtain the needed Debian/Ubuntu errata 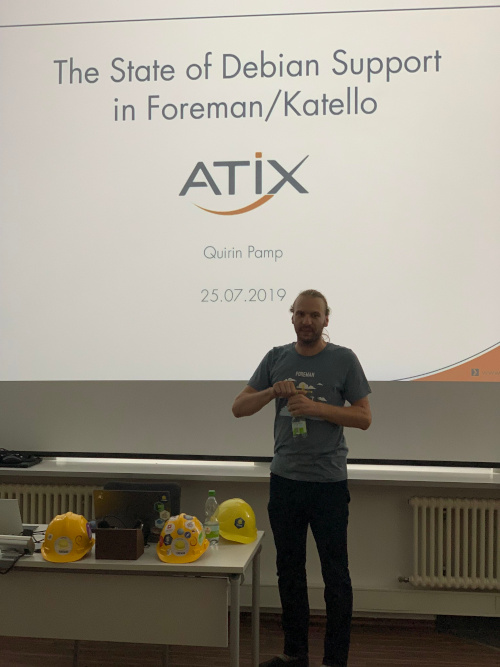 3) A meeting with the Satellite Product Managers:

For the first time at a community event, we had the Red Hat Satellite product managers, Dana Singleterry and Rich Jerrido present to the audience. They shared the future plans for the Red Hat Satellite team and which specific domains the engineers were mostly planning to focus on. The most interesting part about this talk was an insight into how Red Hat is contributing to the wider open source community. They explained the release cycle of Red Hat Satellite to highlight the way Red Hat promotes upstream first. 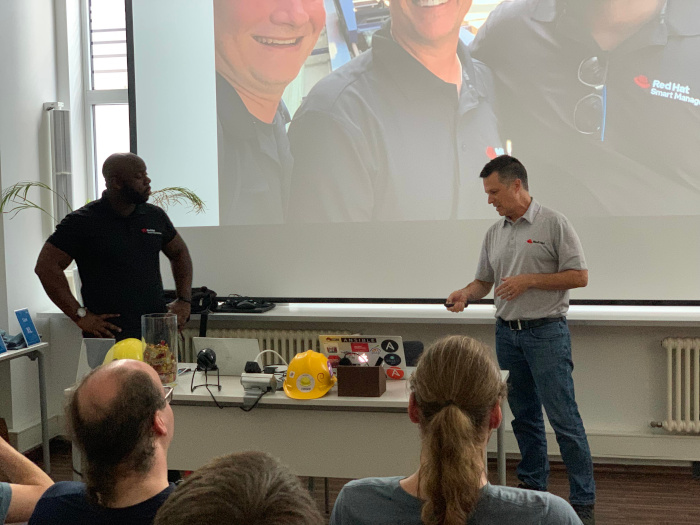 5) The social aspect of being part of the Foreman community:

Ewoud Kohl van Wijngaarden has been a part of the Foreman community since 2012 and has a huge collection of the Foreman swags and memories which he shared with us on the birthday event.

After Ewoud’s talk, the party went on with interesting discussions over pizza and beer!

As a return gift, all the speakers were given a new Foreman umbrella. For other participants, we also had t-shirts, stickers, Foreman caps and gummy bears.

A cake is a must at every birthday party…right! This year, on the 10th Birthday of Foreman, we arranged for a big birthday cake and invited Ohad to cut the cake. As a humble gesture, Ohad invited everyone present to join him in cutting the cake together. That’s how, together, we celebrated Foreman’s turning 10. 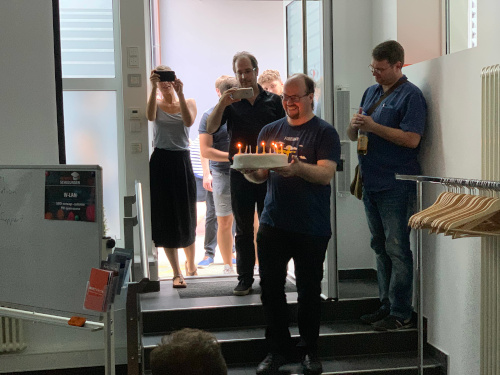 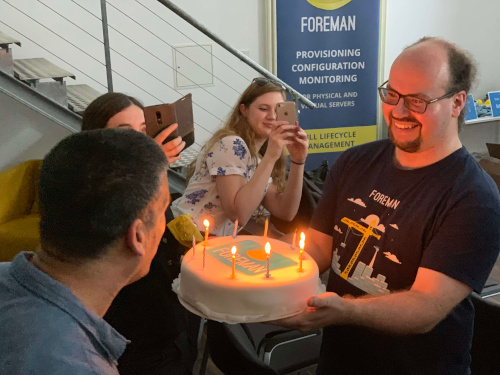 A special thanks to Dirk Götz who took care of all the arrangements right from planning the event to marketing, website management, food, cake and swags! 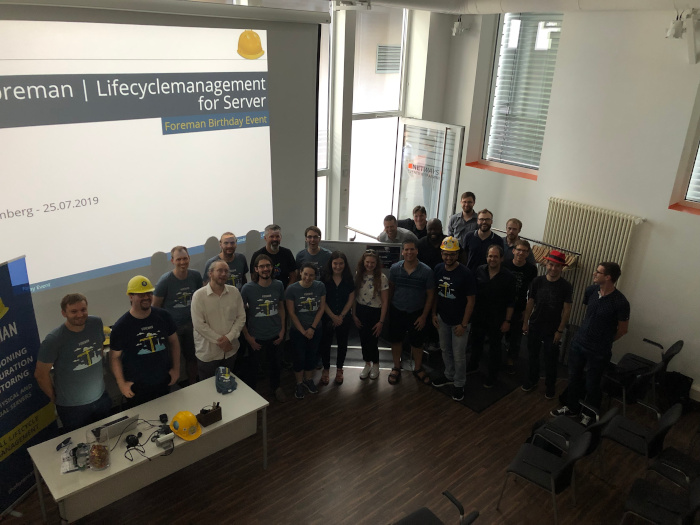 The talks being so interactive, with community members asking a lot of questions. This signifies the popularity and curiosity of people towards the Foreman project. I would like to thank all the Foreman community members who were present at the event to make the birthday celebration a special one. Can’t wait to see you all again next year!